Born in Huddersfield, David Tindle studied at Coventry School of art from 1945 to 1947 He taught at Hornsey College of Art and Byam Shaw School of Art from 1959 to 1974 and in 1972 was appointed visiting tutor at the Royal College of Art, where he remained until 1983. He went on to be made Ruskin Master of Drawing at Oxford University from 1985 to 1987.

Tindle’s first one-man show was held in 1954 at the Piccadilly Gallery, London. Subsequent one-man exhibitions were held throughout the UK and Europe including 57 Gallery, Edinburgh (1957), Metropole Gallery, Folkestone (1963 and 1965), and Galleria Carbonesi. He was elected RA in 1979. His work is held in major public and private collections including: The Royal Collection, The Royal Library, Windsor Castle, London Museum, The Tate Gallery, The National Portrait Gallery, The Arts Council, Contemporary Art Society, Manchester City Art Gallery, to name a few. He lives and works in Italy. 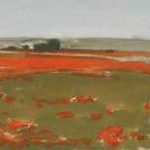 View from the Berkshire Downs