David Jones was born in Brockley in 1895 to a family of craftsmen. Animals that were to remain his preferred subject immediately fascinated him. In 1915 Jones enlisted in the army, an experience that had a profound effect on his life and work. During these war years he moved towards accepting the Roman Catholic faith. These two elements, war and religion, coloured his life from then on. 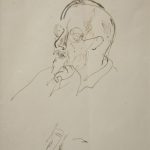 Pen and ink on paper

David Jones joined Eric Gill’s Guild of Saint Joseph and Saint Dominic in Ditchling, East Sussex, in the early 1920s. He had converted to Roman Catholicism, choosing ‘Michael’ as his confirmation name, in 1921 and Gill was an obvious choice as mentor at that seminal point in Jones’s artistic and spiritual journey. Gill himself was soon to split with the Guild, however, and moved with his family and some followers to Capel-y-ffin in south Wales to pursue a more agrarian way of life. David Jones spent much of his time between the years 1924 and 1927 living with the Gills and their acolytes in a rambling former monastery just outside Capel-y-ffin itself. He had become engaged to Gill’s middle daughter, Petra, whose characteristic long neck and high forehead were to inform Jones’s portrayal of ‘standardised’ female features in his art for the rest of his career, even though his engagement to Petra herself lasted no longer than a couple of years.

The present drawing is a very rare example of a portrait of Gill by Jones and depicts the master deep in thought, the reflection from his round glasses half-concealing his eyes and his left hand supporting his bearded chin. It is a pose of great stillness, and demonstrates Jones’s closeness to the sitter, capturing him as he does in a private moment of repose and quiet contemplation. 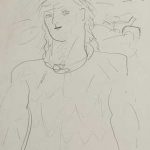 Figure of a man

Provenance: R.A.Gekoski, London, the Estate of the artist and with Anthony D’Offay Gallery, London. 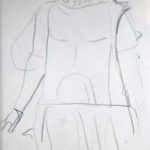 Provenance: R.A.Gekoski, London, the Estate of the artist and with Anthony D’Offay Gallery, London.