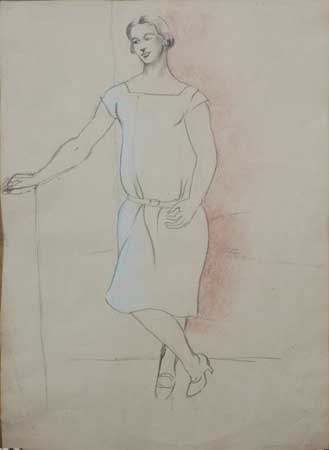 This delightful full-length portrait of a young woman by Christopher Wood (1901-1930) depicts the figure in a relaxed pose, appearing to lean against a wall with her legs crossed and her right arm resting on a plinth. The arrangement of her hair and the style of her dress indicate that the drawing was probably created by Wood in the last years of his life during the later 1920s. Wood employs a beautifully controlled line to delineate his sitter’s belted dress, her arms, hands, legs and feet in their high heels. It is only for her face that he uses shading to impart volume and modelling, to capture her composed, interior gaze and her gently inclined head.

Portraits of girls and young women played a significant part in Wood’s oeuvre, and at their finest they are some of his most powerful works. Although perhaps best-known for his coastal scenes of Brittany and Cornwall, it was in these female portraits, and particularly in his drawings on this subject, that he attained the greatest stillness and thoughtfulness to be found in his small output. Addicted to opium, Wood died under a train at Salisbury station aged only twenty-nine.