Charlotte Halliday was born in 1935. She studied at the Royal Academy Schools, London, where, under the influence of Henry Rushbury and Albert Richardson, she began to find her own voice as an artist. She was awarded the Silver Medal for drawing and her talent was soon recognised in the world outside the Academy. Commissions started to roll in while she was still a student. The most important was for the engineers constructing the Shell Centre in the late 1950’s for whom she produced 16 large drawings as the project developed, starting with the foundations and continuing during the years it took to complete. The commission set her on the road as a professional freelance artist that she continues to be today.By the time Charlotte Halliday took her first studio near Leighton House she knew that the buildings and architecture of London were her passion. Cathedrals, churches, terraced house, scaffolded towers and building sites were ‘her’ subjects, landscapes with the works of man very much in evidence. From her second and indeed present studio in Abercorn Place, St Johns Wood, she is close to the varied architectural styles of London that she loves. She paints from life, retreating to her car as a studio when the weather gets too rough, but this primary response to her subjects, done ‘on the spot’, is the very essence of her work. Her strongly constructed but delicately rendered buildings have in themselves become familiar landmarks.Charlotte Halliday has exhibited widely in group exhibitions in London. She has been the Keeper of the New English Art Club since 1989 and her work has won many awards. Her sensitive and poetic interpretations are always in demand. 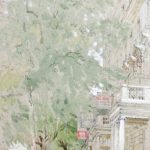 Church by the Regent’s Canal, London

Pencil and watercolour on blue paper 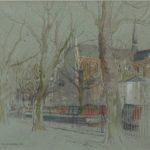 Pencil and watercolour on buff paper