Catriona Campbell was born in Dollar, Scotland in 1940. Her father, Ian Campbell, was also an artist and teacher.
Catriona went on to study art at Glasgow School of Art from 1957 to 1961. She was a student of David Donaldson and Mary Armour. She was awarded The Somerville Shanks Prize for Portraiture in 1959 and graduated in 1961.

Catriona Campbell’s work displays a passion for figurative painting and an intuitive sense of colour. She works mainly in oils producing paintings rich in colour and depth.

Campbell has won a number of awards including the Founder’s Prize and the Anne Redpath Award from the Scottish Society of Women Artists, and the Morton Fraser Award from Visual Arts Scotland. She was elected a professional member of the Scottish Society of Women Artists (now re-named Visual Arts Scotland) in 1986 and subsequently a professional member of Paisley Art Institute.

Catriona Campbell’s work has been exhibited at a number of leading Scottish Art Galleries including: the Royal Scottish Academy, The Royal Glasgow Institute, The Society of Scottish Artists. She has also exhibited at the Royal Society of Portrait Painters in London. Her paintings are held in both public and private art collections in the UK, Canada, USA, Australia, New Zealand, Spain and Hong Kong. 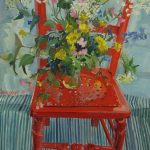