Breon O’Casey is the son of the Irish playwright Sean O’Casey, and moved to St Ives in the 1950s, having been inspired by Alfred Wallis; he later described the town as his salvation. He worked as an assistant to Barbara Hepworth for several years, and sculpts himself, as well as painting, print-making, and for many years making jewellery. Previously he studied under Jacob Epstein at the Anglo-French Art Centre in London, as well as studying design at Dartington under the Bauhaus metalworker Naum Slutsky.

O’Casey’s paintings and designs have been influenced by tribal art from around the world, including Africa, Oceania and South America. These two cards show one of his typical design forms, a double chevron; the application of coloured paper collage is equally typical, whilst also displaying a primitive urge, not unlike a child’s delight in cutting-out and decorating, and recalling the later dicta of Picasso and Matisse. 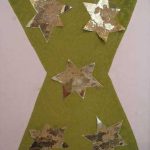 Acrylic and collage on card 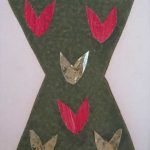 Acrylic and collage on card

signed by the artist verso