Bo Hilton was born in 1961 and moved to Botallack, near St Just in West Cornwall with his parents at the age of three. This was his home until he went to university in 1984, where he obtained a BSC in Biology from London and later an MA in Fine Art at Brighton in 1988.

Bo Hilton hails from a rich artistic background, the son of the late abstract painter, Roger Hilton and, and his wife, Rose, who recently had a solo retrospective Tate, St Ives.

Bo Hilton is a member of The New English Art Club, the home of the very best of figurative and representational painting. Inspiration for his work can be seen in the work of painters such as Bonnard, Matisse and (of today), Ken Howard. Colour and tone are significant in Bo’s interpretation of light. His ability to observe and capture the spirit of the moment in oil has been noted by a number of London galleries. Over the last decade Bo has exhibited on a regular basis at the RA, NEAC, The 20th Century British art fair and his work hangs in many private collections. 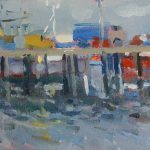 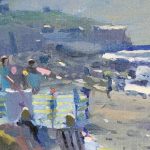 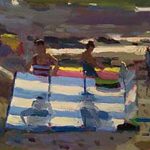