Biddy Picard arrived in Cornwall having hitched a lift on board a Welsh Crabber, and lived with her family first in Lamorna, in a gypsy caravan. Moving to Mousehole in the 1960s, she set up the Mousehole Pottery and Craftshop, and began painting and making stoneware sculptures. Her early abstract painting owed much to the contemporary work of William Scott, Paul Feiler and others working in Cornwall at the time, placing an emphasis on bold geometric patterning, softened by the textures and colours of the land. She began exhibiting with the Newlyn Society of Artists, as well as teaching at Penzance School of Art. By the end of the seventies she had moved from semi-abstraction to painting Cornish scenes of harbour life, albeit mostly imaginary. Her work has become highly sought after, and she had a major retrospective at the Great Atlantic Galleries in 2005.

‘West Penwith Landscape’ dates from the 1970s, when Picard taught at the Penzance School of Art. She began a series of mixed-media paintings in mottled brown hues, incorporating elements of monoprint, often based around the shapes of coastal rock formations. This painting hovers between landscape and abstraction. Echoes of the hilly headland and cliff appear to project beneath the landscape’s surface: the metamorphosing forms suggest the subterranean strata of tin, and its mining in womb-like caverns, such as we find in the paintings of Peter Lanyon. But there is also the suggestion of boat forms in the lower right, and the reflected sun suggests the sea continues down the painting too – rendering those curves also coastal inlets. 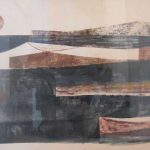