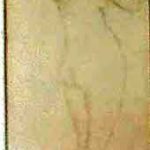 pen and ink and wash on paper

Provenance: With a note of authenticity from Dorelia John (the artist’s wife) attached to the backboard and ex-ownership label.

This captivating drawing of Eve by one of Britain’s most revered artists is most probably a study for a larger work titled, Adam and Eve in the Garden of Eden from 1908. Here Eve is depicted in a three-quarter turned pose, with a raised forearm, suggesting her femininity, compliance and grace and recalling Milton’s description in Paradise Lost, Book IV:

‘ She, as a veil, down to the slender waist Her unadorned golden tresses wore Dishevelled, but in wanton ringlets waved As the vine curls her tendrils, which implied Subjection, but required with gentle sway, And by her yielded, by him best received, Yielded with coy submission, modest pride, And sweet, reluctant, amorous delay.’

Finished drawings by John are highly sought-after and this enigmatic composition recalls other female nudes and portraits including those of his wife Dorelia, executed with similar energy and passion. Augustus John was one of the greatest British draughtsmen well-known for his firm yet supple line and this nude is characteristic of his female figure drawings: noble, with poise and dignity, simple but never superfluous.