Anthony Eyton studied fine art at Reading University before serving in the Army from 1942-1947. He went on to study at the Camberwell School of Art. He later worked in both Italy and Canada and was head of painting at St Lawrence College, Kingston, Ontario.

There have been many one-man exhibitions of Eyton’s work, beginning with the New Art Centre, London in 1959. A retrospective of his work was held at the South London Art Gallery in 1980. His work has featured in a number of important group exhibitions, ‘Drawings of People,’ The Serpentine Gallery, 1976; ‘British Painting 1952 to 1977’, The Royal Academy of Arts, 1977; ‘British Art Show’, The Arts Council, 1979 and ‘The Hard Won Image’, The Tate Gallery, 1984.

Since 1999 Eyton has been Resident Artist at the Eden Project in Cornwall. He has received numerous awards for his work which features in a number of important public and private collections including The Arts Council of Great Britain, The Contemporary Arts Society, Government Art Collection, Imperial War Museum, Royal Academy of Arts, London and the Tate Gallery London. 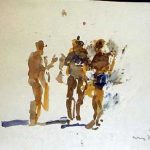 watercolour and pastel on paper

signed, titled and dated 1995 by the artist in pencil