Ann Hewson was born in London. She studied at South-West Essex Technical College and attended evening classes at the Regent Street Polytechnic School of Art, where she was taught by the painter Clifford Hall (1904-1973) (who would later become her husband in 1956). Her work was exhibited at various London galleries and she had a joint exhibition with Nigel Lambourne at the Belgrave Gallery, London in 1976 and a solo show at the John Denham Gallery, London in 1985. 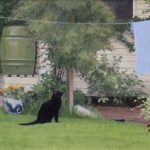 Oil on board signed