Born in Ashbourne, Derbyshire, in 1944. Andrew Macara has lived and worked in Derby most of his life.

Whilst still finding inspiration from the activities in the local parks during both the winter and summer months, the artist is always excited by the special light experienced on his travels to foreign countries. Observing children at play on recent trips to Thailand, Spain, and France inevitably creates new images to be captured on canvas. The artist considers himself mainly self-taught, apart from a brief spell studying with Leonard Fuller at the St. Ives School of Painting.

Andrew Macara was elected a member of The Royal Society of British Artists in 1981 and The New English Art Club in 1984. Exhibiting work regularly at these societies exhibitions at The Mall Galleries, he was awarded the De Lazlo Medal in 1985. 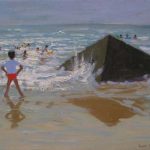 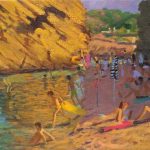