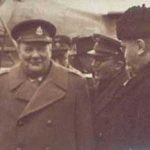 monochrome photograph of Churchill as Prime Minister and Molotov at Churchill’s departure from the Moscow Conference on 19 December 1944 after his second wartime visit.

A FINE, CONTEMPORARY PHOTOGRAPH OF CHURCHILL AND MOLOTOV AT THE THE MOSCOW CONFERENCE, `TOLSTOY’–`IT HAS BEEN A PLEASURE AND AN HONOUR TO HAVE SO MANY LONG INTIMATE TALKS WITH MY FRIEND AND WAR COMRADE MARSHAL STALIN’. The photograph shows a smiling Churchill in military uniform with John Martin, his Principal Private Secretary, on his right, Andrei Vyshinski, the Soviet Deputy Foreign Minister, behind him, and Vladimir Pavlov (Stalin’s interpreter) and Vyacheslav Molotov (the Soviet Foreign Minister) to his left, the group assembled at the aerodrome in front of Churchill’s aeroplane `Commando’. This picture was taken on the final day of the `Tolstoy’ Conference (9-19 October 1944), during which Churchill and Stalin met to discuss the post-war spheres of influence (during which Churchill famously scribbled on a piece of paper the suggested division of those spheres, which Stalin endorsed by boldly ticking across the entire sheet before pushing it back across the table to Churchill), a process finalised at the Yalta Conference in 1945. At the end of the `Tolstoy’ Conference, Stalin (most unusually) went to the airport to be present at Churchill departure, and speeches were made by both leaders, Churchill’s (quoted in part above) ending: `I hope most earnestly, and I believe with deep conviction, that the warrior statesman and head of Russia will lead the Russian peoples, all the peoples of Russia, through these years of storm and tempest into the sunlight of a broader and happier age for all, and that with him in this task will march the British Commonwealth of Nations and the mighty United States of America’ (W.S. Churchill, The War Speeches, London: 1952, III, p. 242). A photograph from the same series is illustrated in M. Gilbert’s Winston S. Churchill. Road to Victory, London: 1986, fig. 32.