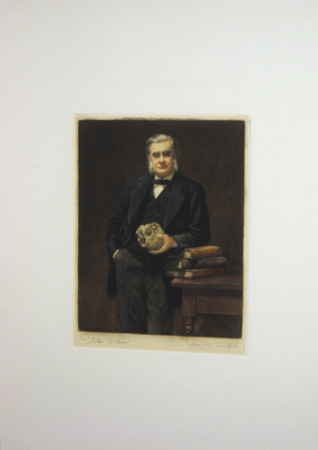 £900 (pair, within original mounts with letterpress descriptions to reverse.)

Rare aquatint/mezzotint portraits of Charles Darwin and Thomas Huxley produced in
colour in the 1920’s with a limitation of only 400 copies after which the plates were destroyed. After the originals in the National Portrait Gallery and pencil signed by the engravers.

This portrait of Charles Darwin, the great scientist and author of On the Origin of Species, is an engraving after the original portrait undertaken by John Collier for the Linnaean Society and later presented to the National Portrait Gallery. Collier was himself the son-in-law of Darwin’s friend and defender, Thomas Henry Huxley. The portrait shows Darwin as an old man in the year before his death and “represents him standing facing the observer in the loose cloak so familiar to those who knew him and with his slouch hat in his hand. Many of those who knew his face most intimately, think that Mr Collier’s picture is the best of the portraits and in this judgement the sitter himself was inclined to agree.” (Darwin, Francis. Life and Letters of Charles Darwin. Vol. II, 1887, p.399.)

No examples traced in NPG, V & A, or Wellcome collections. The National Library of Australia holds examples of both portraits. The Huxley, but not Darwin portrait was included in the 1992 Sotheby’s sale, “Darwin’s century: The Jeremy Norman Collection.”