John Collier was born January 27, 1850, the son of a judge and amateur artist, Lord Monkswell. He was educated at Eton and studied at the Slade under (Sir) E J Poynter, in Paris under Jean-Paul Laurens, and in Munich. Although not their pupil, he was encouraged and influenced by Sir Lawrence Alma-Tadema and Sir John Everett Millais.

Collier was from a talented and successful family. His grandfather, John Collier, was a Quaker merchant who became a Member of Parliament. His father (who was a Member of Parliament, Attorney General and, for many years, a full-time judge of the Privy Council) was created the first Lord Monkswell. He was also a member of the Royal Society of British Artists. John Collier’s elder brother, the second Lord Monkswell, was Under Secretary of State for War and Chairman of the London County Council.

Collier’s first wife, in 1879, was Marian Huxley, daughter of the biologist T. H. Huxley. She was also a painter, who studied, like her husband, at the Slade, and exhibited at the Royal Academy and elsewhere. After the birth of their only child, a daughter, she suffered severe post-natal depression and was taken to Paris for treatment where, however, she contracted pneumonia and died in 1887.

Collier was one of the 24 founding members of the Royal Society of Portrait Painters, of which he became Vice President. He was also a member of the Royal Institute of Oil Painters. He exhibited no fewer than 130 paintings at the Royal Academy and 165 at the Royal Society of Portrait Painters, as well as many others in galleries throughout the country and abroad. He was the author of The Primer of Art (1882), A Manual of Oil Painting (1886) and The Art of Portrait Painting (1905). He was awarded the OBE in 1920. He was the subject of The Art of the Honourable John Collier (1914) by W H Pollock, published by the Art Journal, which lists all his most important subjects between 1875 and 1914, whether portraits, or historical or other dramatic scenes. It has 50 illustrations and 6 colour plates of his works, and an interesting photograph of his studio.

The range of Collier’s portrait subjects can be seen from the fact that, in 1893 for example, his subjects included the Bishop of Shrewsbury (Sir Lovelace Stamer), A Glass of Wine with Caesar Borgia, Sir John Lubbock FRS, A N Hornby (Captain of the Lancashire Eleven), A Witch, A Tramp, and the Bishop of Hereford (Dr Atlee).

His commissioned portrait of King George V as Master of Trinity House in 1901 when Duke of Cornwall and York, although very far from being his best work, shows the extent of his fashionable reputation. 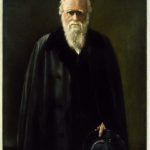 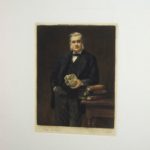 £900 (pair, within original mounts with letterpress descriptions to reverse.)

Rare aquatint/mezzotint portraits of Charles Darwin and Thomas Huxley produced in colour in the 1920’s with a limitation of only 400 copies after which the plates were destroyed. After the originals in the National Portrait Gallery and pencil signed by the engravers.

This portrait of Charles Darwin, the great scientist and author of On the Origin of Species, is an engraving after the original portrait undertaken by John Collier for the Linnaean Society and later presented to the National Portrait Gallery. Collier was himself the son-in-law of Darwin’s friend and defender, Thomas Henry Huxley. The portrait shows Darwin as an old man in the year before his death and “represents him standing facing the observer in the loose cloak so familiar to those who knew him and with his slouch hat in his hand. Many of those who knew his face most intimately, think that Mr Collier’s picture is the best of the portraits and in this judgement the sitter himself was inclined to agree.” (Darwin, Francis. Life and Letters of Charles Darwin. Vol. II, 1887, p.399.)

No examples traced in NPG, V & A, or Wellcome collections. The National Library of Australia holds examples of both portraits. The Huxley, but not Darwin portrait was included in the 1992 Sotheby’s sale, “Darwin’s century: The Jeremy Norman Collection.”