Hubert Andrew Freeth was a portrait painter and etcher. He studied at the Birmingham College of Art and The British School in Rome. He was elected ARE in 1938 and RE in 1946. He exhibited regularly at the Royal Academy and the Royal Watercolour Society from 1936. His work is held in numerous public collections. The National Portrait Gallery holds a good selection of his etchings and drawings of authors and politicians, including Enoch Powell and Alan Sillitoe, (though, not the present portrait of Somerset Maugham).

This etching was made in 1946 and exhibited at the Royal Academy in 1947. Freeth ‘acquired his own etching technique of a multiplicity of small strokes more by experiment than by lessons from teachers’ (Robin Garton, British Printmakers, 1855-1955). 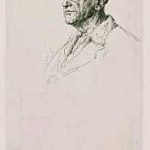 signed and titled by the artist in pencil

The full sheet in good condition apart from a crease to the upper corner of the sheet.