Frederick Hollyer was a print-maker and engraver who collaborated with members of the Pre-Raphaelite Brotherhood in trying to develop large-scale photographic prints as a better artistic alternative to engravings. Hollyer was so successful in developing the technique and able to achieve such fine control of the whole process that some of his platinotypes are almost indistinguishable from drawings.

.A platinotype is a type of photograph made by a process derived from that invented by William Willis in 1873, but perfected to the degree of facsimile by Frederick Hollyer when photographing drawings. The paper was impregnated (not coated as is the usual case) with light sensitive compounds of iron. After exposure through a negative, a fine layer of platinum was deposited on the exposed areas by means of a chemical reaction. The temperature when the reaction took place determined the colour of the image. 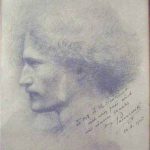 Platinotype portrait after Edward Burne-Jones’ famous drawing of the renowned Polish pianist Ignacy Jan Paderewski, (1860-1941) by Frederick Hollyer on wove paper , inscribed by the legendary pianist, “To Mr H. M. Henderson with every good wish and sincere thanks J J Paderewski, 24.6. 1925” in ink across the lower half of the sheet.

This fine associational piece is a platinotype after an original drawing by Burne-Jones. It is inscribed by the legendary pianist, Paderewski to Archibald Henderson who was the organist at Glasgow University from 1905 until he retired in 1954.

Paderewski recalled the execution of this portrait in his memoirs: ‘I was driving gaily along in a hansom cab one day on my way to St John’s Wood, when suddenly I saw a gentleman approaching. He was walking slowly along and even at that distance he radiated an unusual kind of power and nobility. He had the expression of an apostle, I thought. Instinctively I raised my hat from the depths of my hansom cab and saluted his dignity. I did not know then that it was Burne-Jones, the great portrait painter. A few days later I was taken by a friend to his studio when he made four or five [silver-point] sketches of me, one of which acquired a very wide popularity. It was done in two hours – it was marvellous. I remember that he drew very rapidly, even violently. It became one of his most famous drawings and was known everywhere. The original is here in my house – he was gracious enough to give it to me. A princely gift.’ Ignace Jan Paderewski & Mary Lawton, The Paderewski Memoirs, London 1939.

Paderewski was the personification of the pre-Raphaelite image of beauty. The celebrated painter, Sir Edward Burne-Jones was apparently struck by an “apparition” when he first encountered him, calling him ‘An Archangel with a splendid halo of golden hair.’ Indeed, his magnetic presence and beauty were never so well captured as in Burne-Jones’ spiritual portrait of the pianist.