Born in New York City in 1893, Florence Henri first studied music, then painting under Fernand Léger in Paris and photography at the Bauhaus under Lazlo Moholy-Nagy and Josef Albers during 1927 and 1928. After her studies, she moved to Paris where she set up a studio for portrait, fashion and advertising photography. Her work was included in many seminal exhibitions and publications of the late 1920s and early 1930s, contributing to the international language of photographic experimentation and abstraction referred to as the New Vision in Europe. Henri’s photography demonstrates a mastery of portraiture and still-life, incorporating close-ups, reflections and montage in her repertory of techniques. Like other ‘new photographers’ of the time, she also made use of unusual viewpoints and her photographs reflect the influence of cubism, often using mirrors to produce pictures that are fragmented and spatially ambiguous. 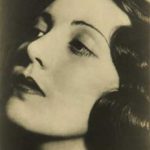 Tête de femme is a beautifully-composed and gentle portrait of an unidentified sitter and was executed and printed circa 1931. It was given by Florence Henri to the famous London gallerist, Erica Brausen, who was a close friend of Henri’s and who herself sat for a number of portraits by Henri. Upon Erica Brausen’s death, the photograph passed to Brausen’s life-companion, the Pompidou curator Jean-Yves Mock.