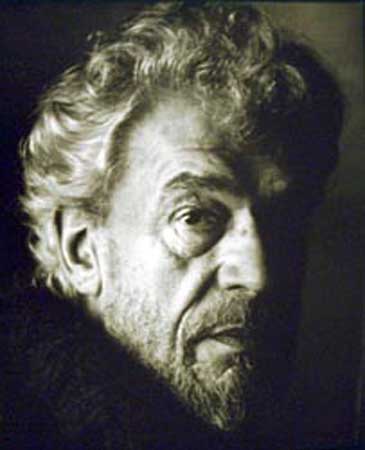 Portrait of the Actor Paul Scofield who played Oberon in A Midsummer night’s Dream and the Don in Don Quixote at the National theatre in 1982.

Paul Scofield is one of Britain’s finest classical actors, and is often described as the greatest actor in the world. It is a remarkable accolade for such a self-effacing man, one who frequently turned down parts that would have led to fame and riches. But Scofield has always followed his own path and after sixty years his acting still surprises, and wins the admiration of critics. Of the same stature as Redgrave, Gielgud and Olivier, although of a younger generation, Scofield too won international acclaim. He was awarded an Oscar for his portrayal of Sir Thomas More in A Man For All Seasons in 1966 — and was nominated for best supporting actor for his role as Ralph Fiennes’ father in Quiz Show in 1995. His distinguished stage career includes all the great roles: Tynan described his Hamlet as the best he’d ever seen. Paul Scofield won a Bafta in 1997 for The Crucible and was made a Companion of Honour in 2001. An alternative portrait from the same sitting is illusted in Snowdon: Sittings 1979-1983. 1983: 108. The National Portrait Gallery holds an alternative bromide print from the same sitting, 25 march 1983 in its collection.