William Nicholson was born in Newark and was a well-known painter, illustrator and author of children’s books. He was a student at Hubert von Herkomer’s art school and he later married the painter Mabel Pryde in 1893. Nicholson’s brother-in- law was James Pryde and together they were known as the Beggerstaff Brothers and produced striking graphic work and their inimitable woodcuts. Nicholson produced the woodcut books An Alphabet and An Almanac of Twelve Sports and the famous series of portraits in 1899 and 1902, Twelve Portraits.

He was involved in illustrating books for Robert Graves and wrote and illustrated a number of titles for children, Clever Bill (1926) and The Pirate Twins (1929). One of his greatest juvenile successes was illustrating the charming tale of The Velveteen Rabbit by Margery Williams in 1922. 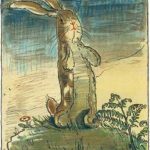 numbered from limited edition of 850

After an original lithographic illustration by Nicholson for The Velveteen Rabbit or How Toys Become Real, (1922) by Margery Williams. It chronicles the story of a toy rabbit and his quest to become real through the love of his owner.