William Hanna and Joseph Barbera began their collaboration in 1937, directing theatrical cartoons for MGM Studios. They were responsible for 113 Tom And Jerry shorts. In 1957 the acclaimed animators launched Hanna-Barbera Productions to produce cartoons for a burgeoning new medium, television, which Hanna and Barbera saw as a window of opportunity to create a new arena of original animation and a fresh stable of cartoon stars. Hanna Barbera cartoons are known and loved for their clever dialogue and sophisticated musical compositions. 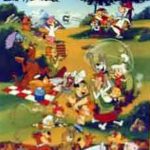 Photograph of some of the colourful cartoon characters created by Hanna Barbera including The Flintstones, Top Cat, Scooby-Doo, The Jetsons and Yogi Bear created by animators Hanna-Barbera inscribed “Best wishes Bill Hanna” in pen.