William Andrew (“Willy”) Pogany was a prolific, Hungarian illustrator of both children’s and adult books. He was born Vilmos Andreas Pogany in Szeged, Hungary. He studied at Budapest Technical University and later in Munich and Paris. Pogany came to America via Paris and London where he had produced his four greatest illustrative masterpieces, Coleridge’s The Rime of the Ancient Mariner (1910), Wagner’s Tannhauser (1911), Parsifal (1912) and Lohengrin (1913). In 1918 he illustrated a children’s version of Homer’s, The Adventures of Odysseus and the Tale of Troy, retold by Padraic Colum. Pogany is best known for his illustrations of classic myths and legends in the Art Nouveau style. 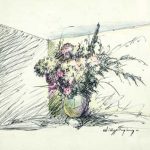 pen and ink and crayon