Early Soviet children’s books, while produced on a tight budget, are celebrated for their vivid colour and originality. Many Western publishers were inspired by their widespread use of colour lithography and the overall freshness of their presentation. These works drew from a long tradition of peasant art and Slavic folklore as well as the experimentation of Russian art at the time. Sadly, Stalin’s doctrine of ‘socialist realism’ effectively put an end to this era of originality in children’s illustration. 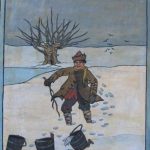 Pen and ink with gouache on card