Stephen Balint (“Val”) Biro was born in Budapest, Hungary, the son of a lawyer. He studied art at the Jaschnick School of Art, Budapest and in 1939 came to England to study at the Central School of Arts and Crafts. After the War he worked for a number of publishers and printers designing over twenty-nine dust-jackets for the publishing house of John Lehmann. He went on to illustrate well over 400 books, mostly for children. He is perhaps best known for the ‘Gumdrop’ series written and illustrated by Biro. The stories were based on the author’s own 1926 Austin Healey. The Victoria and Albert Museum holds examples of his work. 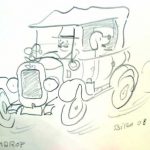 signed, titled and dated by the artist