Tony Ross was born in London in 1938. He studied at the Liverpool School of Art 1956-61 and worked in advertising before becoming Senior Lecturer in Art at Manchester Polytechnic.

He has illustrated books for many authors, including Roald Dahl, Paula Danziger and Michael Palin, but he also writes and illustrates his own books. His first title was Goldilocks and the Three Bears (1976), since then he has produced a whole series of reworked and updated fairy tales. His series of books about extra-terrestrial teacher Dr Xargle, written with Jeanne Willis, have become extremely popular, as has his much-loved Towser series.

Some of his books have been animated on television and there are several videos featuring his work. 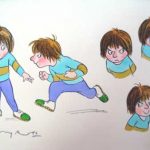 pen, ink and watercolour on paper

The illustrator’s guide drawings for the animated television series of Horrid Henry.