The Wombles were created by author Elisabeth Beresford and were inspired by a child’s mispronunciation one Christmas, when Elisabeth took her children to Wimbledon Common for a Boxing Day stroll. Back home that same day, Elisabeth made out a list of Womble names. The first Wombles book was published in 1968 and, after it was broadcast on Jackanory, the BBC decided to make an animated series. The Wombles’ motto ‘Make Good Use of Bad Rubbish’ and their passion for recycling was far ahead of its time and captured the imagination of children everywhere, who began to organise Womble Clearing Up Groups. Thirty-five five-minute films were broadcast on BBC1 accompanied by Mike Batt’s music and The Wombles theme song, Underground Overground, Wombling Free.

The Wombles originally appeared in a series of children’s novels from 1968 and later starred in a number of British comics, such as Teddy Bear and Jack and Jill from 1973-1981. The present illustrations were published in Jack and Jill during the 1970s and are depicted in the same manner as their BBC television counterparts. A number of British and international artists provided a number of illustrations and cover designs for the series including: Antonio Lupatelli, Bert Felstead, Hugh McNeill and Jesus Blasco, a realist comic painter who did many of the ‘Wombles’ illustrations. 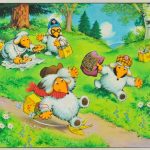 pen and ink and gouache on paper, laid onto board

annotated and titled below image