Ronald Searle was born in Cambridge and studied at Cambridge School of Art from 1936-1939. He served in the Army during WW2 and was captured by the Japanese. During his time as a POW he helped build the Burma railway. After the war his career as a cartoonist flourished and he lived in the same house as fellow artists Robert Colquhoun and John Minton. He contributed his work to a number of magazines including Punch and between 1941 and 1953 he published his immensely popular series on the terrible schoolgirls of St. Trinian’s. His work has illustrated many books on a variety of subjects and continues to be one of Britain’s best-loved cartoonists and satirists. His work has been widely exhibited across the globe and a number of public collections hold his work, including the British Museum and Victoria and Albert Museum. 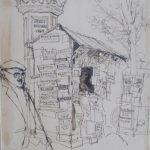 This early and fully finished pen and ink drawing is an original illustration for Searle’s Paris Sketchbook which is considered to contain some of the artist’s best work. ‘It is a personal journal by a husband and wife,who, loving Paris, dedicated a holiday to recording some of the people and places they most wanted to remember’ – dust-jacket blurb.) 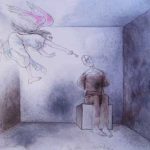 signed, titled dated and numbered from edition of 200