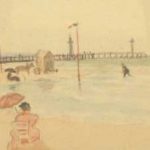 Watercolour over pencil on paper

Provenance: Spink, London; with the artist’s widow until 1932.

The present drawing of holidaymakers at Trouville relates to Caldecott’s series, ‘Sketches at Trouville’ published in the Graphic in 1879.

“Caldecott made brief sketches for the series while staying at the Hotel de Paris, Trouville, where he wrote to William Clough, ‘… There are not many tip-top, right nobby A-1, smashing swells here: but there are some nice-looking interesting folks’ (Harvard letter 27 August 1879.)” Quoted in Rodney Engen. Randolph Caldecott ‘Lord of the Nursery’ p. 16.