Margaret Emily Noel Nuttall-Smith who works under the name Peggy Fortnum was born in Harrow, Middlesex. She illustrated some eighty childrens’ books, but is perhaps best-known for her timeless illustrations for Michael Bond’s series of books on Paddington Bear from 1958-1974. She attended the Turnbridge Wells School of Arts and Crafts, and the Central School of Arts and Crafts. It was here that she met the artist John Farleigh, who was the Art Director of the Sylvan Press who recognised her ability as an illustrator. Her illustrations for Kenneth Grahame’s The Reluctant Dragon were exhibited at the British Museum.

A Spot of Decorating

Reference: Michael Bond. More About Paddington (1959); to illustrate Chapter 2. ‘A Spot of Decorating.’ The image was first published in black and white in 1960 and reprinted in colour in the 1990s. 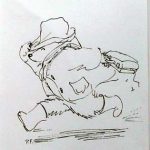 signed with initials and titled in pencil by the artist