Nick Butterworth was born in Kingsbury, North London in 1946 and, from the age of three, lived in Romford in Essex, where his parents took over the running of a sweet shop. After leaving leaving school, Nick took a job as a typographic designer in the printing department of the National Children’s Home. He went on to work for several major design companies before moving into freelance graphics in partnership with Mick Inkpen, together with whom he produced over thirty acclaimed children’s books.

Nick Butterworth works from his studio at his home in Suffolk, where he keeps every single illustration he has ever done.

His most famous creation is Percy the Park Keeper and the first story, ‘One Snowy Night’, was published in 1989. Since then Nick has written over five Percy the Park Keeper stories, as well as some new books featuring Percy and individual animal friends. His books have been acclaimed as children’s classics.

The Percy the Park Keeper books have achieved outstanding success and popularity around the world. They have sold over four million copies and been translated into fifteen languages, and mark Nick out as one of the most popular and talented author/illustrators in children’s books today. 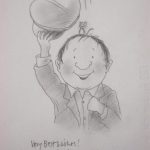 signed, dated 2008 and inscribed by the artist