Michael Hague is an American illustrator renowned for his intricate work, primarily for children’s fantasy books. He has illustrated a number of classic works in the genre, including The Wind in the Willows, The Wizard of Oz, The Hobbit and the stories of Hans Christian Andersen.

Hague trained at the Art Center College of Design in Los Angeles. He lists his influences as the comic series: Prince Valiant as well as the works of Disney, and earlier illustrators such as Arthur Rackham and W. Heath Robinson. 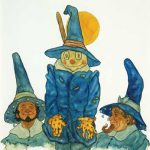 The Scarecrow and two Munchkins

Pen and ink and watercolour on paper

An original book illustration for Frank L. Baum. The Wizard of Oz, illustrated by Michael Hague and published by Holt in 1982.