Michael Bond was born in Berkshire on 13th January 1926. He was educated at Presentation College, Reading. During World War II Michael Bond served in both the Royal Air Force and the Middlesex Regiment of the British Army. He began writing in 1945 and sold his first short story to a magazine called London Opinion. This experience helped him decide that he wanted to be a writer. Michael Bond never thought of writing for children but, after producing a number of short stories and radio plays, his agent suggested that he adapt a television play for children.

One Christmas Eve he stumbled upon a lonely little bear in a London toy store. Michael bought the bear and took it home as a present for his wife Brenda, naming it Paddington because they lived near the station of the same name. Within ten days of owning Paddington the Bear, Michael found he already had a book on his hands. His first book, A Bear Called Paddington, was published in 1958, at the time, Michael Bond was working as a television cameraman for the BBC. After the first Paddington book was published, Michael Bond went on to write a whole series and by 1967 his books were so successful that that he was able to give up his job with the BBC in order to become a full-time writer. The Paddington books have sold all over the world and have therefore been translated in nearly thirty different languages. In total, he has written nearly 150 books, including his autobiography, Bears and Forebears published in the UK by HarperCollins.

In July 1997 Michael Bond was awarded the OBE for this services to children’s literature. 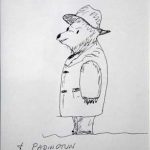 A very rare drawing by the creator of the most famous marmalade eating, suitcase carrying bear in the world, Paddington.