Margaret Ross illustrated and authored eight children’s books during the 1940s and 1950s. Most were published by the Museum Press and the Soho Gallery. The early titles are characteristic of wartime illustrated books, often printed on poor-quality wartime paper. The Second World War had a disastrous effect on book production. Many illustrators were called up and artist’s materials became scarce. However a few enterprising publishers set out to give the public reasonably priced but well-designed books as photolithography made the reproduction process less expensive. The large format of Ross’ s books and profusion of images is typical of 1940s children’s books, a format inspired by the Babar titles of Jean de Brunhoff and Edward Ardizzone from the late 1930s. The illustrations and innocent tales of animals echo the cosy, domestic settings of Kenneth Grahame’s books and have a delightful and timeless quality and seem to have been popular as some of the titles were later reprinted in the late 1950s: Margaret Ross has that rare gift of combining amusing story-telling with pleasing illustrations, a delightful imagination with meticulous attention to detail. Her first books The Flippits and Tiger Island, have already won wide popularity. Now in Mr Badger’s successful plan and other stories in preparation-she shows the same charming qualities in profusion, (Publisher, 1944.)

Her work was also popularised and mass-produced in the form of a series of 1940s large-format nursery prints including: The Baby Show, A Day at the Seaside and Off to School.

original pencil and watercolour illustrations from two of the author’s books, Mr Rusty Fox goes to the Banquet, 1945 and Mr Badger’s Successful Plan, 1944, both published by the Museum Press. All the drawings are highly finished, some annotated for publication and titled in pencil by the illustrator. The pencil drawings are roughly 8 x 10cm. (average) and the larger coloured drawings 22 x 28cm. The are available within mounts; or framed in simple gilt frames. 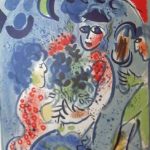 Illustration for Mr Rusty Fox goes to the Banquet

pencil and watercolour on paper

annotated by the artist in pencil