The following series of finely-executed drawing showing children at play were produced to advertise ‘Chilprufe’ in the 1920s, a range of undergarments made from pure new wool aimed at women and children.

An exhibition of her work titled ‘Lilian Hocknell. Drawings of Children’ was held at the Sporting Gallery, London in 1926. 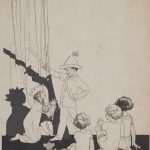 original artwork for a “Chilprufe for Children” catalogue

Pen and ink and wash on board