Kate Greenaway was born into a family of artists, her father an engraver, and friend of both the colour printer Edmund Evans and Myles Birket Foster, one of the most famous of Victorian artists. Greenaway trained at the Slade, and began work as a book illustrator, designing Valentine and Christmas cards and bookplates. It was through Edmund Evans that Greenaway became widely known: having seen a portfolio of her drawings and poems he was enchanted and immediately published them as the collection Under the Window. After the volume’s runaway success Greenaway produced book after book for children, Mother Goose and the Pied Piper of Hamelin being among the most famous; already in her day these works were being published in editions of tens of thousands.

Greenaway’s illustrations were celebrated for the magical Regency world they captured. Her style was largely derived from artists such as Stothard, yet is distinct in its child-like innocence, charm and sentimentality, which greatly appealed to Victorian taste. Her pen drawings in outline are particularly fine, exquisitely and meticulously drawn; her watercolours are in fact pen drawings washed over with muted colours.

Greenaway became an intimate friend of John Ruskin, who admired her work and encouraged her engagement with nature. Her legacy is widespread, and her work spawned numerous imitators, and was even reproduced in the designs of clothing and accessories. She is still among the most beloved and collected of nineteenth-century artists. 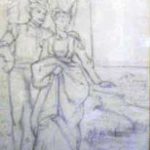 Throwing the peel to get a letter

pencil on paper, titled on the reverse

This pencil drawing relates to the early period of Greenaway’s career when she produced a number of similar drawings of figures in Medieval dress for valentine cards and for the book “The Quiver of Love” published in 1876 which consisted of colour plates of medieval couples by Kate Greenaway and Walter Crane to accompany love poems in the form of valentines. “Miss greenaway worked very hard at the production of the designs for birthday cards and valentines. They constantly improved in harmony of colour and delicacy of effect. A curious chance revealed to her the wonders of medieval illumination.” Indeed, the drawing’s caption “Throwing the Peel to get a letter” implys that the girl is attempting to secure a valentine or love note from her companion. It seems likely that this was a sketchbook drawing produced around 1876 given the piece’s strong relationship with those designs finally published as valentine cards and in book form. (Spielman and Layard. Kate Greenaway. 1905)