Jonny Boatfield’s fantastically detailed style is reminiscent of Edward Ardizzone. In 2000 he published The Twilight Book a humourous and extraordinarily inventive children’s book based around the characters from the books on a bookshelf and their fantastical aventures. Much of Boatfield’s work draws on the literature and the books he read as a child but is uniquely imaginative. Jonny was born in 1960 and studied illustration under Quentin Blake, Dan Fern and Michael Foreman. He not only illustrates books but leads workshops and produces installations or intricate walk-in worlds for children. 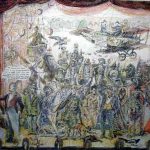 The World and his Wife

pen, ink and watercolour on paper

signed, titled and dated on the mount

This large full-page wonderfully detailed illustration is an allegorical scene showing a variety of figures preparing to perform “the world and his wife”. One is moaning “For heaven’s sake, this is the dress rehearsal, and if God can’t get off his arse and join us for the finale, we’ll drop him from the show altogether.” The picture is full of life and shows a number of figures in satirical style.