Janina Ede was born in Southampton. At Winchester School of Art she studied illustration, lithography, engraving and typographic design. Ede was awarded a travelling scholarship and travelled to France, Italy and Switzerland. After returning she became a freelance artist and she designed book covers for Penguin Books. She mostly illustrates children’s books. Her first illustrative work apart from book covers and jackets was a French text for John Murray. Her techniques vary; she has used many different styles in her illustrations: pen and ink, gouache, scraperboard and spatter. To gain a variety of different textures she has also printed from leaves and fabric.

A selection of charming original pen and ink drawings by Janina Ede to illustrate Johnny’s Journey, published by J. M. Dent in 1970 by one of Czechoslovakia’s best-selling authors, Bohumil Řĩha. Aimed at the younger age group, the story tells of Five-year-old Johnny’s first train journey alone to visit his grandparents in the country. “It is a book of enormous charm and appeal.” 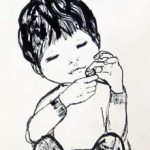 Johnny and the marble