Polish born Jan Michel Pienkowski moved to England in 1946 at the age of ten, and went on to study English Literature at King’s College, Cambridge. He worked for a short time in advertising before founding his own studio to produce cards and posters. Recognised as a unique talent, he was commissioned to illustrate books, and was soon designing graphics and cartoons for the BBC. Meg and Mog (first published 1972) was his first independent picture book, written in collaboration with Helen Nicoll. The huge success of the characters led him to produce at least eleven more titles in the series, the most recent being published in 1987. The books have been endlessly reprinted, children’s love of the characters showing no signs of diminishing.

What distinguishes Pienkowski from other contemporary children’s illustrators is his concern for his books’ production quality. He has experimented with numerous techniques such as torn paper, marbling, bronze-powder, and silhouettes in pursuit of clarity and brightness of appearance. In Meg and Mog he employs heavy black lines for figures’ outlines, creating striking shapes which may then be coloured in. Pienkowski has produced numerous other children’s books and has won the Kate Greenaway Medal twice. He has done set designs for theatre and The Royal Opera House and has seen exhibitions of his illustration. Original drawings by this artist rarely appear on the market. 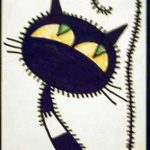 pen, ink and gouache on paper

signed by the artist and dated 2000