Henry Matthew Brock, together with his elder brother, Charles Edmund (1870-1938), formed one of the most dominating forces of late nineteenth and early twentieth century illustrative art in Britain. Both brothers were educated at the Cambridge School and then Brock joined his brother’s studio in 1894 and for many years, the brothers worked together and gained inspiration from each other’s art. H.M. Brock married his cousin in 1912, Doris Pegram, the sister of well -known illustrator Fred Pegram.

Henry had a longer career than that of his brother and was perhaps more gifted as a humourous artist. By the year of his death in 1960, Brock had illustrated a large number of books as well as contributing hundreds of drawings to leading periodicals and journals such as Punch, The Graphic, the Quiver and the Strand.

During his career, Henry Brock regularly exhibited his drawings and watercolours at the Royal Academy and the Walker Art Gallery, Liverpool. He became a full member of the Royal Institute of Painters in Watercolours in 1907. 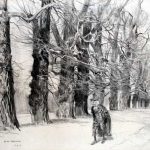