Ernest Howard Shepard is perhaps the best loved of British illustrators. He was born in St. John’s Wood London in 1879, the son of an architect. He was educated at St. Pauls and then at the RA schools from 1897-1902. Shepard began drawing for Punch in 1907 becoming chief cartoonist there in 1945. His great success as an illustrator is connected with the unforgettable illustrations for A. A. Milne’s Pooh books and Kenneth Grahame’s, The Wind in the Willows. Shepard met E.V. Lucas during the period that he worked for Punch over some fifty years. Lucas was also a director of Methuen the publishers and it was he who first suggested that Shepard illustrate some children’s verses for A. A. Milne which first appeared in Punch in 1924. 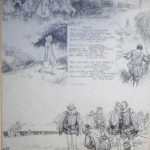 An Original Illustration of the Poem ‘Devon’ By E. V. Lucas

pen and ink over pencil, heightened with white on whatman board

signed by the artist, lower right

The present fine drawing was published in Punch on February 3, 1926 and is illustrated p. 131 to illustrate a series of poems by Lucas on English counties titled “Mr Punch’s County Songs” which was later published in book form in 1928. This large illustration depicts four scenes surrounding the poem in manuscript, all relating to Devon: Widdecombe Fair, Lorna Doone, Kingsley’s Westward Ho! and Sir Francis Drake bowling. Original illustrations by Shepard are scarce and highly sought-after. The present example captures his deftness of line and ability to capture atmosphere and figurative scenes with a seamless ease. His work is represented in the collections of The British Museum, the Victoria and Albert Museum, and the Shepard archive at the University of Surrey.