Enid Blyton was one of the most successful authors of the twentieth century. Her writing is beloved by generations of children and has been widely translated and adapted for the screen. Extremely prolific during her lifetime, Blyton left a legacy of novels that have become hallmarks of British children’s literature. Her books achieved significant popular success worldwide, selling over 400 million copies overall. According to UNESCO’s Index Translationum, she is the sixth most translated author worldwide (with over 3400 translations of her books available in 2007, Blyton is just behind Lenin and almost equal to Shakespeare). Enormously popular in Britain, Malta, India, Pakistan, New Zealand, Singapore, the former Yugoslavia, Japan, and across much of the globe, her work has been translated into nearly 90 languages.

Blyton often wrote books in series, basing them on recurring characters and designing each series specifically for different age groups. One of her most widely known characters is Noddy, intended for beginning readers. Her seminal works, however, are her young readers’ novels. In these books young characters routinely ride out their own adventures with minimal adult help. Particularly popular in this genre were her series The Famous Five (1942-1963, 21 novels following four children and their dog), The Five Find-Outers and Dog (1943-1961, 15 novels in which five children regularly outwit the local police), and The Secret Seven (1949-1963, 15 novels about a society of seven children who solve various mysteries). Her work most consistently involves adventure stories, sometimes including fantasy and magic.

Original artwork below was created for the Famous Five and Secret Seven annuals. 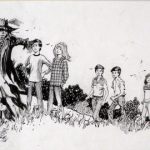 pen and ink and gouache on board