Elisabeth Beresford was born in Paris in 1928, although her family home was in England. Her father was a successful novelist who also worked as a book reviewer for several newspapers. She was the goddaughter of Walter de la Mare (who dedicated several poems to her) and the children’s writer Eleanor Farjeon and enjoyed many literary connections, her parents’ friends included HG Wells, George Bernard Shaw, John Galsworthy, Hugh Walpole, Somerset Maugham and DH Lawrence.

After 18 months as a Wren, Elisabeth began working as a ghostwriter. She later trained as a journalist and was soon writing radio, film and television columns and working for the BBC as a radio reporter.

The Wombles of Wimbledon Common were inspired by a child’s mispronunciation one Christmas, when Elisabeth took her children to Wimbledon Common for a Boxing Day stroll. Back home that same day, Elisabeth made out a list of Womble names. The first Wombles book was published in 1968 and, after it was broadcast on Jackanory, the BBC decided to make an animated series. The Wombles’ motto ‘Make Good Use of Bad Rubbish’ and their passion for recycling was far ahead of its time and captured the imagination of children everywhere, who began to organise Womble Clearing Up Groups. Thirty-five five-minute films were broadcast on BBC1 accompanied by Mike Batt’s music and The Wombles theme song, Underground Overground, Wombling Free.

Elisabeth was awarded an MBE for her services to children’s literature in the 1998 New Year’s Honours List. 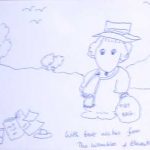 pen and blue ink on paper

titled and inscribed by the artist

A full-page sketch showing Orinoco inscribed by the illustrator and ‘With best wishes from the Wombles and Elisabeth Beresford.’