Eileen Alice Soper was born in Enfield, Middlesex and later moved to Welwyn, Hertfordshire with her family where she lived for the rest of her life. She was educated at home and was taught by her father George Soper who was an engraver, etcher and illustrator. She produced etchings as young girl (two were accepted by the Royal Academy when she was just 15 years old). Her work was exhibited widely and after the death of her father, Soper and her sister continued to maintain the Wildlife sanctuary he had created. Indeed, much of her subjects were drawn there and she produced several books on animals from the sanctuary, When Badgers Wake, 1955 and Muntjac, 1969 a study on the small Asian deer that lived there (see illustrations below.) Later in her career she produced numerous illustrations for magazines and illustrated over 35 Enid Blyton titles for children. Eileen Soper was a founder member of the SWLA, she was elected RMS in 1972.

Provenance: the Estate of the artist 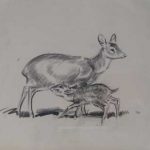