Edward Ardizzone was born in 1900 in French Indochina. He was possessed with a quick eye and was able to capture the very essence of life. By the outbreak of World War Two he was already a household name, spending six years as Britain’s official war artist. He became a master of book illustration, embellishing works for both adults and children; drawings remarkable both for their detail and faultless relationship to the page. Well-known works are the Little Tim series of books. Ardizzone collaborated with Eleanor Farjeon in 1955, ‘The Little Bookroom’ won the prestigious Carnegie Medal and Ardizzone said of his drawings for the book: “All Childhood is there, all I feel about childhood in the dim recesses where that part of me still lives.” Ten of Ardizzone’s best drawings for ‘The Little Bookroom’ form the heart of this collection of works and reveal the illustrator at the very height of his powers.

Ardizzone’s observation of the atmosphere of childhood, of the world conjured by children’s writers for whose books these drawings were commissioned, was acute, yet the works themselves appeal in their intricacy, intimacy and beauty equally to children and adults alike. 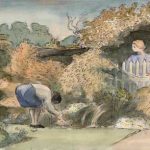 The Lady Next Door