Donald Mackenzie Wallace was educated at Clare College, Cambridge and became a successful wildlife artist. In 1980 he founded the Wallace Parnership, illustrating a number of books on birds. 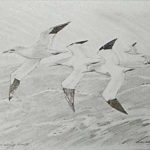 signed, titled and dated ’99 by the artist in pencil