Charles Frederick Tunnicliffe (1901-1979) was born in Langley, near Macclesfield, Cheshire. He grew up on a farm and was educated at the local village school. He studied art briefly at Macclesfield School of Art (1915) before moving to Manchester School of Art. In 1921 he won a scholarship to the RCA (1921-1925), where he met Malcom Salaman who helped arrange his first publication of etchings.

He later left London and moved back to Macclesfield where he focussed particularly on wood engraving of rural topics. He was perhaps best known for his illustrations of Henry Williamson’s works, namely Tarka the Otter (1932) and Salar the Salmon (1936). He was a prolific printmaker, skilled engraver and is renowned for his beautifully observed nature studies. 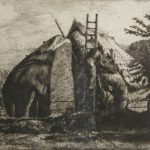