Bob Godfrey is a pioneering animator whose work reflects immense humour and irreverance. He is perhaps best known for his television series Roobarb (1974) and Henry’s Cat (1982). Bob Godfrey was born New South Wales, Australia of British Parents in 1921. He left Australia after six months and came to England. He went to school in Ilford and studied at the Leyton Art School. Godfrey began working in the animation industry as a background painter for the Larkins company at the Film Producers Guild in 1954 and in 1965 formed his own company, Bob Godfrey Films. There followed his Oscar-winning film Great, a half-hour celebration of the life and times of Isembard Kingdom Brunel. His characteristic style was put into practice in the 1970s, where Godfrey invented a technique called ‘boiling’ by drawing in felt tip pen on paper and changing the shape of the outline in every frame to create a blurring effect used to such great effect in Roobarb and Henry’s Cat.

Original work by Godfrey is uncommon. Much of his work is held in The Bob Godfrey Collection at The Animation Research Centre in Surrey. 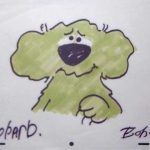 signed , titled and dated by the animator 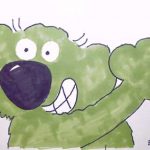 signed and dated by the animator