Barbara Brown was born in Surrey, England, and lived and worked in London. She was educated at Hornsey College of Arts and Crafts and later at the Royal College of Art, specializing in graphic design and book illustration. She went on to illustrate a number of children’s books, including many by Rudyard Kipling, as well as various magazines. She was also a well-known designer of stamps for the Royal Mail. She also designed artwork for enamelled commemorative boxes for Halcyon days. 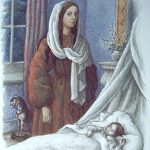 Pen, ink and watercolour on paper

signed with initials and dated ’83 by the artist