Children and childhood were the central focus of Attwell’s delightful and tender vision as an artist. Her drawings of children, many of which were modelled on her daughter, Peggy, had as their primary audience the same age group that she depicts in her work, and these drawings thus speak very directly in their playfulness and gentle nostalgia to young children, just as their technical virtuosity and skill attracts a devoted adult following amongst collectors and connoisseurs alike.

Although Mabel Lucie Attwell attended art classes at the Regent Street and Heatherley’s art schools, her skills were largely self-taught and she disliked some of the rigmaroles of formal art training, such as life-classes and learning artistic technique by repeated copying of Classical subjects. Attwell chose to follow her own idiom from early on in her career: an artistic individuality which led first to regular commissions for magazine illustrations and later to the many commissions for book illustrations that would make her a household name. J. M. Barrie personally picked her to illustrate the gift-book edition of Peter Pan in 1921

These tender drawings, some inscribed with the initials “MLA”, were acquired at auction over recent years from Christie’s and Bonham’s in London. They are finely and deftly executed, all apparently by the same hand, and depict the subject-matter of children at play most closely associated with the celebrated artist Mabel Lucie Attwell. These drawings of typical and joy-filled childhood scenes speak very directly in their gentle nostalgia to young children, while their technical skill appeals also to the serious collector of children’s book illustrations and Modern British art. 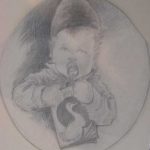