Atholl McDonald was born in Glasgow in 1961. He was the son of an advertising artist, and an enthusiastic artist from an early age. He studied art at Loughton College in Essex for two years, and then went to work in his father’s studio. He worked for a number of years as a freelance artist. In 1990 he was asked to produce some sample ‘Noddy’ illustrations for a BBC promotion which led to his appointment as artist for the ‘Noddy’ merchandise. Atholl started working with manufacturers, illustrating ‘Noddy’ for a range of different products.

In 1993, BBC Books began to publish ‘Noddy’, and the Enid Blyton Estate contacted Atholl to illustrate them. He then made the decision to concentrate on book illustration full-time. 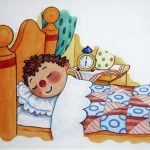 He’s fast asleep in bed by six o’clock. It’s been a busy day for Noddy!

Pen, ink and watercolour on paper